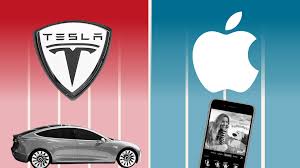 On Monday, Apple and Tesla officially split their stocks as they respectively had claimed they would in the past two months.

Apple split their shares at a rate of four-for-one, and Tesla shares split at a five-for-one.

This excited many investors due to the increased number of shares now at their disposal from the two major companies.

It sent many into a buying craze on Wall Street due to prices being lower for the stocks than seen in an extremely long time.

Before the split, Apple’s stock had quadrupled in worth since the previous split in 2014.