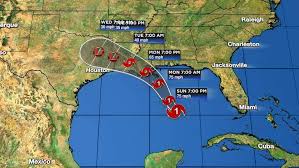 On Monday, it was announced that the incoming storm named Marco has been reclassified as a tropical storm and being moved up to a hurricane on Sunday.

The National Hurricane Center still warned of Marco being a life-threatening storm across the Gulf Coast. The downgrade came due to a decrease in wind speeds to seventy miles per hour at the eye of the storm.

Marco was expected to make landfall in Louisiana on Monday night; however, the storm has appeared to make a westward turn towards Texas.

Marco is also accompanied by another storm, Laura, which marks the tenth time since 1869 that two tropical storms or hurricanes came through within a week of each other.