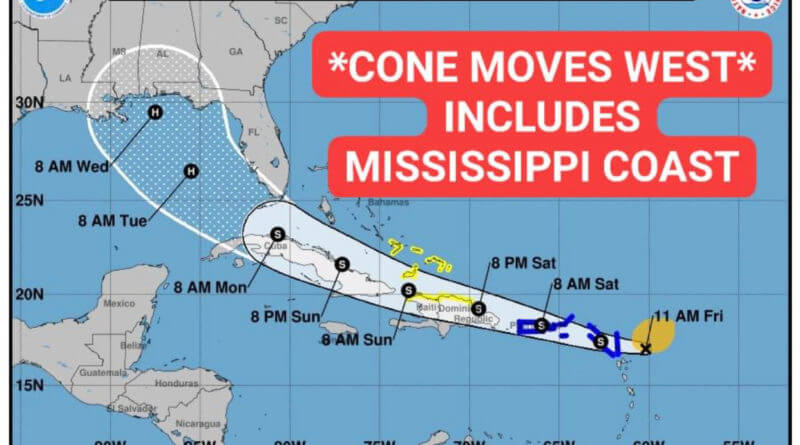 Forecasters and Gulf Coast residents are all keeping a close eye toward Coastal waters this weekend as a possible first-ever weather activity may be about to take place.

The National Hurricane Center is starting to hint about the possibility of two hurricanes entering the Gulf at the same time, as soon as early next week.

If that would happen, forecasters say it would be the first time on record that a pair of hurricanes were in Gulf waters at the same time.

As of late Friday morning, the projected track of what is called Tropical Storm Laura, according to the National Hurricane Center, would reach hurricane strength Tuesday morning and reach the Mississippi-Alabama-Florida shores on Wednesday morning.

Another storm, currently called Tropical Depression 14, is forecast to become a tropical storm over the weekend and reach hurricane strength on Monday morning, then reducing itself back to tropical storm strength as it reaches the Texas-Louisiana coastline sometime on Tuesday. It will also threaten adjacent coastal areas of Mexico.

If Tropical Depression 14 reaches storm strength, the next Atlantic named storm is to be called Marco.

Both projections are early in the process and forecasters say a lot could happen between now and the weekend, so residents are urged to stay up-to-date on the forecasts through local media outlets and the National Weather Service.

Both storms being at hurricane strength at the same time is possible, but may be highly unlikely, depending on timing.  However, what could happen is what meteorologists call the “Fujiwhara Effect,” where two tropical cyclones spinning in the same direction essentially touch and meet together, in effect “dancing” around a common center.  They can be as close as 900 miles away to make the effect happen.

The Fujiwhara Effect is named for Japanese meteorologist Sakuhei Fujiwhara, who first observed and described the phenomenon in 1921.

“It’s important to touch on it, and talk about what the Fujiwhara Effect is,” said Wendy Nations, a Memphis television station meteorologist. “But also, we don’t know much about it! We don’t have many instances of it happening, plus over Gulf waters. It will be interesting to watch for sure.”

Nations also said Tropical Depression 14 entering first may negatively affect what is now Tropical Storm Laura by churning up the Gulf waters, thus cooling them down and limiting further development.

While the Gulf Coast gets the hardest impact of tropical storms and hurricanes reaching its shores, even as far as North Mississippi can heavy rains drench the area as the storm systems break up following landfall on the coast, depending on the storm strength and direction.

The Mississippi Department of Transportation has taken the opportunity to remind residents to have a plan in place in case storms strike the Gulf Coast, noting it was 15 years ago on Aug. 29, 2005 that Hurricane Katrina struck the state.

“Katrina is a hurricane Mississippi will never forget. It serves as a reminder of why it’s so important to have your evacuation plan in place before a tropical storm threatens,” said Tom King, MDOT Southern Transportation District Commissioner. “As we keep a close eye on the developing tropics, we urge residents to act quickly and get their plans in place now.”

Katrina hit the Magnolia State as a Category Three hurricane. The National Weather Service called it among the five deadliest hurricanes ever to strike the United States, with more than 1,800 fatalities and over $108 billion in damage.

To download the Hurricane Evacuation Guide and the full hurricane evacuation kit checklist, and for more hurricane safety tips, visit the MDOT website.

Residents should also continue to closely follow local media or log on to Weather.gov for storm updates.